At the time, to say we were a little daunted by the prospect of building our own home would have been an understatement.

I mean, after 4 years in retail lending with the ‘big four’ I’d heard my fill of horror stories from customers that had engaged a builder to deliver their dream home, only to have it become their worst nightmare. Why on earth would we even consider walking down that very path?

After our first meeting with Sandy and Doug at Farm Houses of Australia, the decision for Wayne and I to proceed with our own build was made easy for two main reasons:

The deal was further sealed when on our first meeting with Doug, he openly admitted a build rarely goes through to completion without some bumps along the way, whether they be due to misunderstandings, unexpected environmental issues, or otherwise. To have a lead builder be that honest and upfront well before we had committed to signing any contracts was remarkable.

True to Doug’s word, we did encounter a couple of minor unforeseen bumps along the way which were speedily smoothed over with outcomes well and truly more favorable than we had thought possible. This is where Farm Houses shone their brightest – their customer service was above and beyond anything we had previously encountered. I dare say my emailed queries to Sandy during the course of our build would have reached near on 600. Not once was it too much effort for Sandy to promptly respond with clarity (and a healthy dose of humor) to allay any concerns we had.

With a project as organic as building a home, it is paramount to select a builder that offers some degree of flexibility. Sometimes it can be so difficult to imagine what the final product will look like until it is already partially completed. Where possible, Doug was always happy to accommodate any last-minute design tweaks throughout the build without any fuss whatsoever.

So here we are at the end of our journey, absolutely enthralled with our new home. My (ex-builder) father has confirmed the quality of the build is excellent; my mother wants to move in; friends and work colleagues are totally envious, and most importantly, as clichéd as it is, we really do live in our dream home.

Our heartfelt thanks to all involved – and yes, we’d most definitely go with Farm Houses again if another build is ever on the horizon! 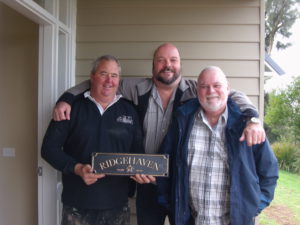 Made with ♥ by Rocking Rose